Drag the matchsticks around to make the equation true.

Escape to exit any level at any time

You can make your own puzzles and load them using a 5 - character code (case sensitive). Feel free to put puzzles you generate in the comments for other people to try.

There is sometimes a bug (because of HTML5 ) where after solving a loaded puzzle, the "Close" button does not work the first time. You have to click it twice to close the menu.

The beeping sound of moving a matchstick is really annoying.

One inherent problem with matchstick puzzles is that some digits could be formed by matched in different ways looking slightly different. 6 and 9 could have one more or less match, and 7 is written by some calculators using four segments. To stop this from being an issue, you should write out a small version of how all digits are supposed to look in the game at the top of the screen to be visible while playing. (Hiding them on an instructions or help page won't help, because if a player has written 6-2=4 with a 6 the game doesn't allow, they will think they are right and that the game is just buggy. They won't stop to look at those instructions.) For extra helpfulness, if the player leaves the wrong version of 6, 7 or 9 on the screen for more than a few seconds you could have the small example digits flash or turn red to indicate what's wrong.

On level 8 you can write 03 = 3 and that feels like it should be allowed (though there is an awkward space between the 0 and the 3). Allowing this solution would also open up for more type of levels to be made. So I would suggest you leave a little bit of less space between numbers and signs to make this sort of solution look more correct (and then let it be correct)

Another change that would open up for more puzzle designs: You should put the lower match of = to be at the same height as the horizontal match in + and -. That way moving the matches in the equal sign (and forming an equal sign elsewhere) would be a thing opened up for. (I haven't played all the levels yet, but from the fact that they're on different levels so far I assume this doesn't change later on.)

But really, just let me turn of the music and the sound effects, I'm listening to music of my own choosing here! 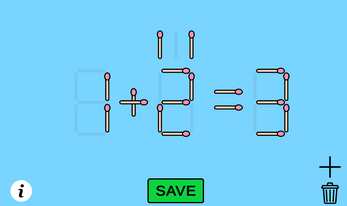 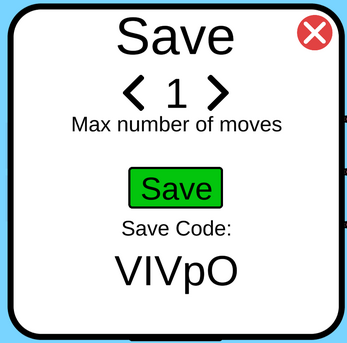